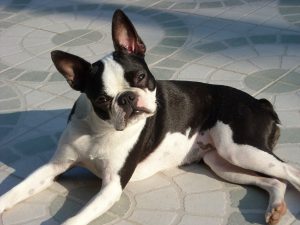 An interesting thing happened to me today.  My dog, Beacon, a Boston Terrier, was scratching and whining at the door (not the interesting part).  Beacon likes to go outside and lay in the sun.  However, for some reason, he only wants to do it for a short while and then come in.  While that doesn’t seem odd, he also doesn’t want to stay in.  He comes in long enough to make sure that nothing is going on inside that he should be a part of, then he is at the door again waiting to go out and start the whole routine over again.

It’s incredibly annoying and frustrating for me.  And, as I did it for the fourth or fifth time today, it occurred to me that there must be a metaphor hidden in this activity.  After some thought, I came up with a few and I am going to share them with you (interesting part.)

Always looking for something better

People are a lot like Beacon.  They start something but can’t put everything all in because there just might be something else going on that they can do.  So, they constantly ‘check in’ on other opportunities to see if they are missing anything.  They are constantly questioning everything that they do.    This is evident in those individuals that can’t stick with one activity or job.  But, you can see it with everyone in their day to day jobs as well.  All of those interruptions add up and make you less productive than you should be.

The solution here is that you must make yourself comfortable with the decisions that you have made.  Give your ideas a chance to come to fruition by putting everything that you have (effort, not money) into the endeavor or project.  Make it a part of your life and your identity as a person.  Once you make the endeavor a part of who you are, you will have created the effort of will required to do that thing and do it to the best of your ability.

Next, I continue allowing it to happen.  When I keep letting him in and out, I get frustrated.  That makes me less productive than I should be.  Have you ever found yourself doing something over and over again just because it is right there? Television and video games are a great example of this.

You walk in the house, you sit down, and you turn on the television.  It’s just there.  It is an easy itch that you can scratch, a bad habit that, by itself, doesn’t seem like a big deal.  But, look at it over time and you will see that you have a big problem.  It is a major drain to your productivity overall, even if you are only talking about an hour or two a day of television.

Until you get fed up, you will never stop those bad habits that are slowly killing you.  Visualize the end result of continuing on your current path.  What kind of life will you live if you keep wasting time, eating too much, or procrastinating?  Will you have the life you want?  Will the people in your life have suffered as a result?  How about you?

We don’t know what we want

And, maybe a little bit less obvious here is that people are constantly running back and forth, from task to task, not really knowing what they want.  More often than not, all they do is whine and complain ‘at the door’ hoping someone will bring them to/tell them how/help them get whatever it is that will make them happy.

The problem here is that only we can know what will make us happy.  Only we CAN make ourselves happy.  Happiness doesn’t come from the outside; it comes from within.  Happiness is a mindset, one that you can cultivate with some practice.  But, the first thing you have to do is remove all of that whining and complaining.  If you don’t, I assure you, you will never be happy.

Anyway, these were just some thoughts that I had.  Let me know what you think.